Science fiction author Alice Bradley Sheldon (August 24, 1915 – May 19, 1987) began writing science fiction as James Tiptree Jr. beginning in 1967. Her gender was not publicly known until ten years later. She traveled the world extensively with her parents (her mother Mary Hastings Bradley was an author of fiction and travel books), worked as a graphic artist, painter and art critic for the Chicago Sun, and served in the Army Air Force photointelligence group during World War II, ending her career as a major. She met her second husband, Huntington Sheldon, in Paris, and they were married in 1945. Later, she and her husband worked for the CIA. She received her doctorate in experimental psychology at George Washington University.

Her first story, “The Lucky Ones” (as Alice Bradley) appeared in The New Yorker. She began to write science fiction following her doctorate. She took “Tiptree” from a marmalade jar and her husband suggested the “Jr.” She wrote of her decision, “A male name seemed like good camouflage. I had the feeling that a man would slip by less observed. I’ve had too many experiences in my life of being the first woman in some damned occupation.”

Although it was generally known that “Tiptree” was a pseudonym, people generally thought that the name was to protect someone in the intelligence community. Details of Tiptree’s career were generally correct — except, of course, for gender. People generally assumed she was male. Introducing a Tiptree story in his anthology Again, Dangerous Visions, Harlan Ellison wrote, “[Kate] Wilhelm is the woman to beat this year, but Tiptree is the man.” Robert Silverberg added, “It has been suggested that Tiptree is female, a theory that I find absurd, for there is to me something ineluctably masculine about Tiptree’s writing.”

Tiptree’s fiction contained elements of space opera but with a darker tone. Science fiction critic John Clute wrote, “It is very rarely that a James Tiptree story does not both deal directly with death and end with a death of the spirit, or of all hope, or of the race.” Best known for short stories, her famous work includes “The Women Men Don’t See,” “The Last Flight of Doctor Ain,” “Love is the Plan the Plan is Death,” many anthologized in the collection Her Smoke Rose Up Forever.

At the age of 71, Sheldon took the life of her husband, who was nearly blind, then took her own life. The couple were found dead, hand-in-hand in bed. The suicide note she left had been written many years earlier, and saved until used. The James Tiptree Jr. Award for exploration of science fiction and gender is given in her honor.

Of her work, Brian Aldiss wrote, “Her stories and novels are humanistic, while her deep concern for male-female (even human-alien) harmony ran counter to the developing segregate-the-sexes drive amongst feminist writers; What her work brought to the genre was a blend of lyricism and inventiveness, as if some lyric poet had rewritten a number of clever SF standards and then passed them on to a psychoanalyst for final polish.” 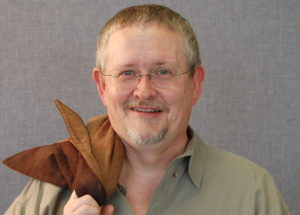 Orson Scott Card (August 24, 1951 – ) is best known for his Hugo and Nebula-winning novels Ender’s Game and its sequel Speaker for the Dead. He is the only author to win both of science fiction’s top U.S. prizes in consecutive years. A movie version Ender’s Game is currently in production and scheduled for a November 2013 release.

An active member of the Church of Jesus Christ of Latter-Day Saints (Mormons), Card served as a Mormon missionary in Brazil. He is a graduate of Brigham Young University and the University of Utah, and currently lives in Greensboro, North Carolina. In addition to science fiction, he’s written plays, radio dramas, and mainstream novels. He wrote the screenplay for John Cameron’s The Abyss, the comic book series Ultimate Iron Man, and contributed dialog to multiple video games.

Card teaches writing at Southern Virginia University and has published several books on writing. He runs an annual “Literary Boot Camp” for aspiring writers and serves as a judge for the Scientology-funded Writers of the Future contest.

A political conservative, Card has written numerous opinion pieces supporting Republican candidates and opposes homosexuality and gay marriage. He argues that scientific evidence against global warming is being suppressed. He criticizes both Darwinism and Intelligent Design. He has five children, each named after authors. He suffered a mild stroke in 2011, impairing the use of his left hand.

Stephen Fry (August 24, 1957 – ) is best known for his comedic work, but he won the Sidewise Award for Alternate History for his novel Making History, describing a world in which Adolf Hitler never existed.