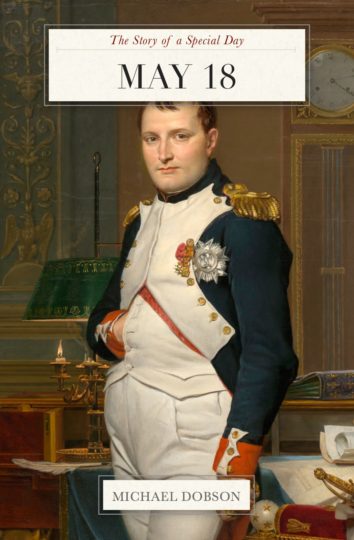 The Story of a Special Day for May 18

On May 18, 1804, the Senate of the First French Republic voted to make Napoleon Bonaparte their Emperor!. In other news, Rhode Island became the first English colony in North America to outlaw slavery, Lincoln won the Republican nomination for President, and Jackie Cochran became the first woman to break the sound barrier.

May 18 is Battle of Las Piedras Day in Uruguay, Independence Day in Somaliland, and National Cheese Souffle Day in the US! (If it falls on the third Friday, it’s National Pizza Party Day, and if it’s the third Saturday, it’s World Whisky Day.) In astrology, May 18 is in the sign of Taurus. May’s birthstone is the emerald, and its birth flowers are lily of the valley and hawthorn.

Each volume of The Story of a Special Day is packed with rare historical photos and fascinating facts. With 78 pages packed with over 47 historic photographs and illustrations, this book is a feast for the eyes as well as for the brain. A perfect birthday present or anniversary gift, “The Story of a Special Day” will make anyone feel special on his or her very special occasion.