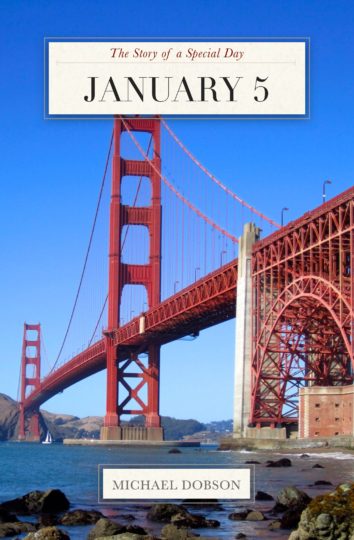 The Story of a Special Day: January 5!

The special occasion gift they’ll never throw away — a whole book for the price of a premium card!

The story of a special day…

What happened on *your* special day? From celebrations around the world to significant moments in history, birthdays, zodiac signs, and all-month events, this ebook makes a perfect birthday present or anniversary gift — one that will be kept and remembered long after an ordinary birthday card has been forgotten!

January 5 is the day construction began on the Golden Gate Bridge! But did you know it’s also the day…

…the first woman became governor of a US state.

…the inventor of the Egg McMuffin was born.

Each volume is packed with rare historical photos and fascinating facts. Did you know that a real economist first said “If you build it, they will come” in the 18th century? That Benedict Arnold led British forces in the burning of Richmond, Virginia? That a French actress and singer named Mistinguett was once the highest-paid female entertainer in the world?

Holidays around the world; birthday gems, flowers, and other symbols; horoscope signs; superstitions; and much, much more! With over 80 pages packed with historic photographs and illustrations, it’s a feast for the eyes as well as the brain. A perfect birthday present or anniversary gift, “The Story of a Special Day” will make anyone feel special on his or her very special occasion.

Look for upcoming titles covering each and every day of the year…because every day is a special day for someone you know! [Ebook coming soon.]