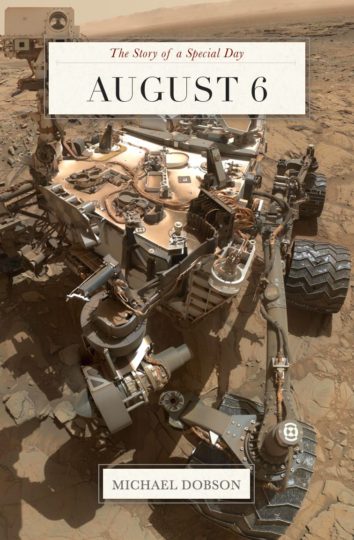 On August 6, 1945, the B-29 Enola Gay dropped the first atomic bomb used in war. Also on August 6, the NASA rover Curiosity landed on Mars (cover), Judge Crater disappeared, and the Ramones played their final concert.

August 6 is the birthday of Andy Warhol, Lucille Ball, and Robert Mitchum; top US ace Richard Bong, young man with a horn Bix Beiderbecke, and super freak Rick James died. August 6 is Children’s Day in Tuvalu, Independence Day in Jamaica, and Lighthouse Day in the US. If August 6 is the first Friday of the month, it’s International Beer Day, and if it’s the first Saturday, it’s International Hangover Day. August’s birthstones are peridot and sardonyx and its birth flowers are poppy and gladiolus. In traditional astrology, August 6 is in Leo; in sidereal astrology it’s Cancer.

The Story of a Special Day is a special occasion gift they’ll never throw away — a whole book for the price of a premium card! From celebrations around the world to significant moments in history, birthdays, zodiac signs, and all-month events, this book makes a perfect birthday present or anniversary gift — one that will be kept and remembered long after an ordinary card has been forgotten! With 100 pages packed with more than 61 historic photographs and illustrations, this book is a feast for the eyes as well as for the brain. A perfect birthday present or anniversary gift, The Story of a Special Day will make anyone feel special on his or her very special occasion. Look for upcoming titles covering each and every day of the year…because every day is a special day for someone you know!