By Hook or By Crook

This piece is from my book Watergate Considered as a Helix of Semi-Precious Stones, available in print or ebook form. 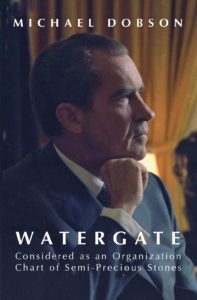 Immediately after Alexander Butterfield revealed the existence of Richard Nixon’s White House taping system, the tapes themselves became the central issue of the unfolding Watergate scandal. While certain key facts (the burglary itself, the link to the Committee to Re-Elect the President) were not in dispute, the critical question was the one being asked by Watergate Select Committee chairman Senator Sam Ervin of North Carolina: “What did the President know and when did he know it?” Now that tapes were available, that question could be settled definitely once and for all.

Watergate Special Prosecutor Archibald Cox filed a subpoena for eight of the tapes almost immediately, and for his trouble was fired in the Saturday Night Massacre. The backlash forced Nixon to appoint a new special prosecutor, Leon Jaworski, who continued to press for the tapes.

The Saturday Night Massacre took place on October 20, 1973. Just about a month later, on November 17, 1973, Richard Nixon traveled to Walt Disney World in Orlando, Florida, for a question and answer session before the 400 members of Associated Press Managing Editor’s Association.

As expected, the first questions involved the Watergate scandal and its consequences for the nation. The president of the Managing Editor’s Association wondered if Watergate was serious enough to take down the country.

“Mr. President,” he asked, “This morning, Governor Askew of Florida addressed this group and recalled the words of Benjamin Franklin. When leaving the Constitutional Convention he was asked, ‘What have you given us, sir, a monarch or a republic?’ Franklin answered, ‘A republic, sir, if you can keep it.’   Mr. President, in the prevailing pessimism of the lingering matter we call Watergate, can we keep that republic, sir, and how?” Nixon assured him that the Republic would continue.

The Louisville-Courier asked about two of the subpoenaed tapes that had gone missing. Nixon replied that he had other information — Dictaphone belts, diary notes, and telephone call recordings — that would substantiate his claims of innocence. The Rochester (New York) Democrat and Chronicle followed up, but gained no more information.

The Rochester Times-Union asked about the connection to the Ellsberg case, and Nixon replied that it was not part of Watergate, and should be considered a national security matter. The Detroit News followed with a softball question that allowed Nixon to once again reassure the public that everything was under control.

The St. Petersburg Times asked about Nixon’s praise of Ehrlichman and Haldeman. Nixon replied, “First, I hold that both men and others who have been charged are guilty until I have evidence that they are not guilty.” (The president of the association later corrected Nixon, who agreed that he had misspoken.) The Des Moines Register and Tribune asked another question about the Ellsberg case, and Nixon reiterated his claim of national security.

Next, the subject of Nixon’s income tax returns came up. Nixon, according to the Providence Evening Bulletin, had paid only $792 in Federal income tax in 1970, and $878 in 1971. Nixon replied that he’d paid $79,000 in income tax in 1969, and the dramatic reduction in tax resulted from Nixon’s donation of his vice-presidential papers to the U.S. government, for which he’d taken a $500,000 deduction. (This practice was outlawed in 1969, so Nixon had gotten in just under the wire.)

The Tennessee Oak Ridger threw in another softball, asking Nixon if the demands of the Presidency were such that he just hadn’t had time to manage the re-election campaign directly. Nixon replied that yes, he’d taken a hands-off approach, but added “I say if mistakes are made, however, I am not blaming the people down below. The man at the top has got to take the heat for all of them.”

Before he took another question, however, Richard Nixon decided to go back to the question of his income tax payments. His government service had not been particularly lucrative, he said. “When I left office…you know what my net worth was? $47,000 total. Now, I have no complaints. In the next 8 years, I made a lot of money [from his book and law partnership]. And so, that is where the money came from.”

Even though the focus of the questions was on Watergate, it was the suspicion of financial irregularities in his personal life that seemed to concern Nixon most of all. Whatever anyone believed of him, his personal finances, he wanted to make clear, were completely aboveboard. It was in defending those finances that Richard Nixon made one of the most famous quotes of his lifetime:

That seemed to stop the questions about Watergate. Reporters asked about the wiretapping of Richard Nixon’s brother Donald, additional matters of national security, the desirability of shield laws for reporters, executive privilege, the energy crisis, possible gas rationing, milk price supports, and what Nixon planned to do in retirement. (Hint: work for campaign finance reform.)

The event, televised live, went a few moments over the scheduled time, but that was okay in Nixon’s book. “It is a lousy movie anyway tonight.”

And when it was over, Richard Nixon said, “Well, thank you very much, gentlemen. I guess that is the end.”

But the end was still nine months away.