Edward Elmer Smith (May 2, 1890 — August 31, 1965), known variously as E. E. Smith or Doc Smith, is called the Father of Space Opera for his two “stories of super-science”: the Skylark of Space series and the Lensman series.

The first Skylark book opens with Richard Seton’s discovery of “Metal X,” which allows total conversion of mass to energy, and within a few chapters, Seton and his partner Reynolds Crane have built a starship and set out in pursuit of evil scientist Marc “Blackie” DuQuesne, who has kidnapped Seton’s girlfriend in hopes of securing Seton’s invention for himself. Soon stranded 46.27 light-centuries from home on the planet Osnome, they have a number of adventures before returning home in a new spacecraft, Skylark Two. In the second volume, Skylark Three, they stop the evil Fenachrone from conquering the galaxy, and in each subsequent volume the stakes and the super-science grow higher and higher.

The Lensman series is even more ambitious, beginning with the collision of two galaxies and a war spanning millions of years between the noble Arisians and the evil Eddorians. Operating in secret, the Arisians begin an intergalactic breeding program to build a race capable of defeating Eddore, culminating in Kimball Kinnison, the human Grey Lensman, and his partners Worsel the Velantian, Tregonsee of Rigel I,  and Nadrek of Palain VI. As with the Skylark books, the super-science grows exponentially with each book. Negative energy torpedoes, planets used as weapons, and inherently indetectable speedsters that go ninety parsecs an hour all pale before the might of the Lens itself.

In real life, Smith was a food chemist who set standards for butter and oysters for the National Bureau of Standards, but later moved into private industry, where he specialized in the development of doughnut mixes. (He is credited as the man who figured out how to make powdered sugar stick to doughnuts, demonstrating how science fiction improves our everyday lives.)

A beloved figure in early science fiction fandom, Smith was guest of honor at the second World Science Fiction Convention (Chicon I), attending the masquerade dressed as C. L. Moore’s character Northwest Smith. A fan group known as the Galactic Roamers had the privilege of previewing his later work. He was a friend of Robert Heinlein’s, famously road-testing a car Heinlein intended to buy.

Ideas from Smith’s work have entered into the real world, ranging from SDI to stealth technology, the OODA Loop, and AWACS. 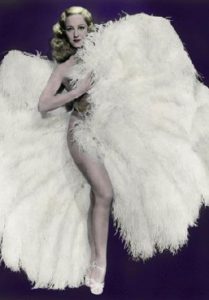 It may seem odd to have an entry for fan dancer Sally Rand in a blog about important events and people in science fiction, but there is a connection: she was a high school classmate of Robert Heinlein and shows up directly and indirectly as a presence in several of his books. She accompanied Heinlein to the 1976 World Science Fiction Convention, where he was guest of honor.

Beginning her career at the age of 13 as a chorus girl at Kansas City’s Empress Theater, Rand had a brief career in silent films, but when sound came in she became a dancer, known particularly for her fan dance. Appearing at the Chicago World’s Fair, she was arrested for indecency four times in a single day, although her apparent nudity was only an illusion. (Later, she wore body paint personally applied by Max Factor, Sr.) She expanded her repertoire with a bubble dance, and was arrested twice in San Francisco. In the second arrest, although she appeared to be nude behind a white fan, she was actually wearing long underwear labeled “Censored — SFPD.”

She was the model for Mary-Lou Martin in Heinlein’s story “Let There Be Light,” among other characters, and cameoed as herself in Heinlein’s last book, To Sail Beyond the Sunset, as a friend of Lazarus Long’s mother. Her fan dance appeared as a scene in the film The Right Stuff.