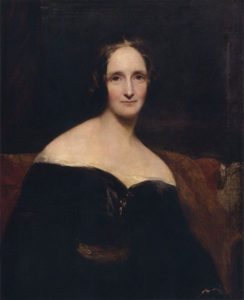 Author of Frankenstein: or, the Modern Prometheus, first published in 1818, Mary Wollstonecraft Shelley (August 30, 1797 – February 1, 1851) wrote a number of other novels, short stories, and travelogues, and edited the works of her husband, Romantic poet Percy Bysshe Shelley.

Her father was the political philosopher William Godwin, and her mother was Mary Wollstonecraft, early feminist author of A Vindication of the Rights of Women (1792). Mary Wollstonecraft died when her daughter was only eleven days old. Family friends included Samuel Taylor Coleridge and Aaron Burr.

In 1814, shortly before she turned 17, she met and began an affair with Percy Bysshe Shelley, who abandoned his pregnant wife to be with her. Their courtship took place at St. Pancras Churchyard, by the grave of her mother. She became pregnant the same year, giving birth to a premature daughter, who died in her first month of life.

Frankenstein had its origins in the summer of 1816 in Geneva, Switzerland. Mary and Percy joined poet Lord Byron and his companion John Polidori at a rented villa. During a rainstorm, the group decided that each would write a tale of the supernatural, and that night Mary came up with the idea. Originally, she thought it would be a short story, but it grew into a novel, first published two years later, in 1818.

Meanwhile, two suicides (Mary’s half sister and Percy’s ex-wife) led to a custody battle, in which Percy’s lawyers advised he get married. Although Mary had used Shelley’s last name for social reasons, the relationship was formalized on December 30, 1816. She was pregnant with their second child. Mary Shelley would have four children altogether, three of whom died in their first years of life.

The Shelleys left England and traveled around Europe, never staying in one place for long. Shelley’s debts and the social ostracism of the couple caused numerous problems. Percy Bysshe Shelley died in a sailing accident in 1822, and she returned to England, making a precarious living by her own writing and by editing her husband’s work. She received a small allowance from Percy’s father for the support of the child.

Starting in 1839, she began having headaches and intermittent paralysis, and died in 1851 at the age of 53. Her doctor suspected a brain tumor. Her son and his wife arranged for her burial at St. Peter’s Church, Bournemouth, near their home. 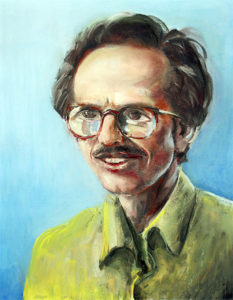 Prominent underground comix creator Robert Dennis Crumb (August 30, 1943 – ) is the creator of Fritz the Cat, Mr. Natural, and the iconic “Keep on Truckin'” image, which has been used (often without credit or compensation) widely.
His father was a career Marine and his mother reportedly abused amphetamines. Crumb grew up in an unhappy household plagued by frequent arguments. He became a cartoonist for the Topps company, then moved to Cleveland, where he designed greeting cards. In 1967, he moved to San Francisco to work in the underground comics field, and lived there until he and his second wife moved to southern France in 1993.
Crumb was a founder of Zap Comix, where Fritz and Mr. Natural first appeared, and worked extensively in the field, becoming its best known and most successful practitioner. In addition to underground comix, he recently published a brilliant illustrated graphic novel version of the Book of Genesis, faithfully portraying all fifty chapters.
Crumb has been repeatedly honored. He is an inductee of the Will Eisner Comic Book Hall of Fame, and has been nominated for the Harvey Special Award for Humor and the Angoulême Grand Prix.